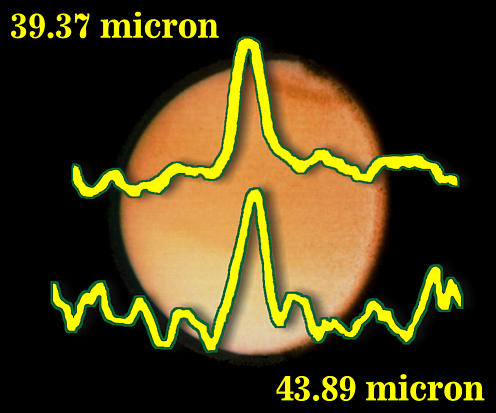 The presence of water vapour in the mysterious atmosphere of Saturn's largest moon, Titan is revealed by infrared emission at wavelengths of 39.37 and 43.89 microns. The European Space Agency's Infrared Space Observatory (ISO) observed Titan with its Short Wavelength Spectrometer during several hours of observations in December 1997, when Titan was at its farthest from Saturn.

The international team headed by Athena Coustenis of Paris Observatory and Alberto Salama of the ISO Science Operations Centre at Villafranca has commented that: "Water vapour makes Titan much richer. We knew there was carbon monoxide and carbon dioxide in Titan's atmosphere, so we expected water vapour too. Now that we have found evidence for it, we can expect to better understand the organic chemistry taking place on Titan and also the sources of oxygen in the Saturnian System. After ISO, the Huygens probe will reveal the actual degree of complexity in a mixture of elaborate organic molecules closely resembling the chemical soup on the young Earth."

These observations were the subject of an ISO/ESA Information Note, Nr 09-98;


"Evidence for water vapor in Titan's atmosphere from ISO/SWS data"