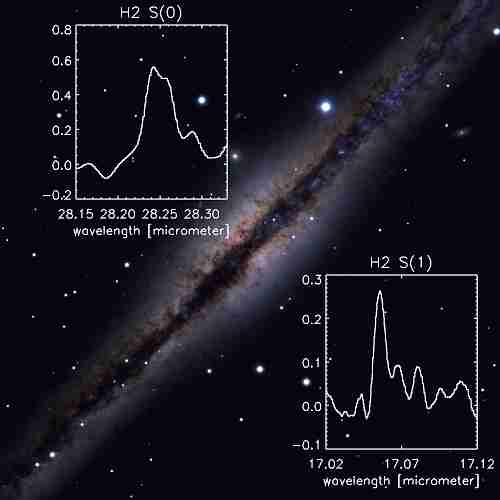 A true colour photograph of the edge-on Spiral galaxy NGC 891 (field of view is 6.7 x 6.7 arcminutes). The dark band running through the center of the disk is caused by the effect of large dust clouds in this galaxy. At 8 positions in this disk, even beyond the field of this photo, the ISO-SWS has detected the signal from molecular hydrogen gas (H2).

The graphical inset shows the signal of the H2 lines at 17.0 and 28.2 micrometer wavelength, detected at the outermost position of the survey, at a distance 12 kilo parsec (37000 light-years) from the center, a position where other observations of lines of molecules, like the CO molecule, are trailing into the noise. From the ratio of the signal strength of these lines a temperature of the gas of about 80K is derived.


These observations were discussed in details in a ESA Science Web Note:


High-resolution images of the Galaxy NGC891 are available at NOAO: http://www.noao.edu/image_gallery/html/im0002.html