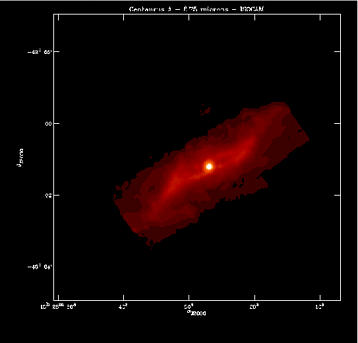 A flat, disk-shaped galaxy, seen almost edge-on, has collided with a large, round, elliptical galaxy to make the peculiar object known to astronomers as Centaurus A. The first clear picture of the impacting flat galaxy appears in an infrared image from the European Space Agency's Infrared Space Observatory, ISO. In images by visible light, the flat galaxy is an anonymous dusty band. It comes to life when ISO's infrared camera ISOCAM looks at it, and the precise orientation of the disk of the flat galaxy becomes plain.

Lying 15 million light-years away in the southern sky, Centaurus A is a relatively close object outside our own Galaxy. Listed as NGC 5128 in a 19th-Century catalogue, it earned its modern name of Centaurus A as one of the strongest sources of cosmic radio waves. Two huge lobes of radio emissions, each filling an area of the sky ten times wider than the Moon, extend north and south from the visible object.

The ISOCAM investigation by French astronomers of CEA Saclay (in preparation) clarifies the nature of Centaurus A. At first sight the impacting galaxy looks like any other disk-type galaxy seen by infrared. When the astronomers compare emissions at different infrared wavelengths, they find features attributable to an active black hole in the centre of the flat component. Furthermore the twin jets of electrons that create the radio lobes emerge exactly at right angles to the disk of the flat galaxy as delineated by ISOCAM, just as expected in the theory of how a black hole creates jets.

These observations have been discussed in the ISO/ESA Press Release;