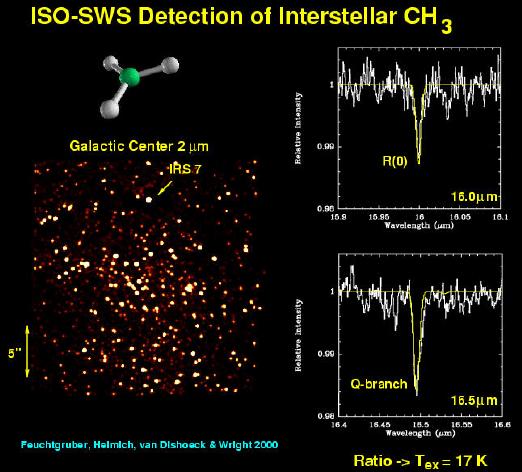 Caption: These two spectral lines are the 'signature' of the methyl radical CH3. The ratio between the lines reveals the excitation temperature of the CH3 gas, -256° Celsius. The chemical structure of CH3 is shown at the upper left side of the image, with the carbon atom depicted in green between the three hydrogens. An image taken at the Calar Alto observatory (Granada, Spain), showing the region of the galactic centre where CH3 was detected is given in the lower left. The source IRS 7, marked with an arrow, is very bright in the mid-infrared, and worked as a 'background lamp' in this observation, helping astronomers to detect the signal from CH3.

This observation has been discussed in details in the ESA Science Web Note: "[ISO detects a new molecule in interstellar space]".